Pro Set is well known for its early ability to correct, change, or modify cards as desired. This final series card of Dexter Manley is an example of a card that was changed very early in the press. I had read of the existance of this card, but for many years simply didn’t believe it existed. A few years ago, a copy made it’s way to eBay. I have now seen a couple in the past few years. This ultra-rare variation will set you back a couple of hundred dollars. A January 26, 2012, eBay auction 260938437678 commanded $382.00. 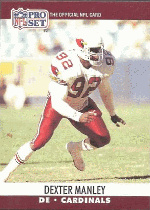 Reinstated by Commissioner Paul Tagliabue 11 weeks into 1990 season after suspension for violating the league’s substance-abuse policy … Immediately waived by Redskins, but was claimed by Cardinals … Involved as spokesman for United Way anti-illiteracy program.

The back of the common variation will read:

After missing the first 10 weeks of the 1990 season, Dexter returned to the NFL … He was immediately waived by Redskins, but was claimed by Cardinals … Involved as spokesman for United Way anti-illiteracy program.