This is a listing of official US Elvis Presley releases through RCA records. I have read through considerable amounts of literature, various auctions and other resources to compile the following matrix or cheat sheet. This list is a checklist and is as complete as time will tell.

Exceptions do exist, as in the case of Kissin’ Cousins available with a MONO DYNAGROOVE label, Today with tan label, Elvis Sings The Wonderful World Of Christmas with tan label or It Happened at the Worlds Fair with orange label.

Elvis Presley 33 1/3 RPM Record Guide (US) Matrix Horizontal Key
The numbers from the left column correspond to the numbers in the table below.

Elvis Presley 33 1/3 RPM Record Guide (US) Matrix
This matrix lists all releases from the first run through the final run using the original RCA catalog numbers. This chart does not include re-releases or re-issues with alternate catalog numbers or releases after 1977.

Note the distinction of LSP(e) over the LSP prefix for the early Elvis releases. The (e) means that the original monaural recordings were Electronically Reproduced into stereo. Incidentally, there are undocumented variations in these releases where LSP-1254(e) was released as LSP-1254. This however, is a production error in labeling. It should be noted that the contents on the vinyl are the same. Later Elvis releases would be released simultaneously in true stereo and in monaural.

Elvis Presley was in high demand and RCA wanted to capitalize in on this sensation. RCA released EPA-747 as Elvis’ first Extended […]

In the 1970’s RCA introduced 4 channel quadraphonic vinyl records and 8 track tapes. Quadraphonic audio is considered to be similar or […] 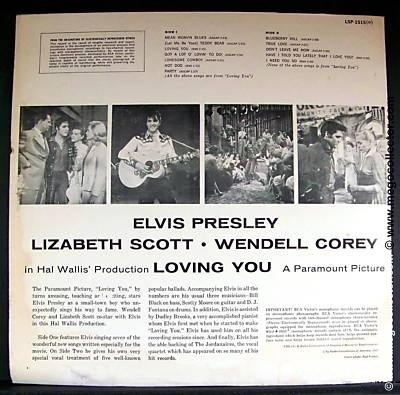 The July 1957 release of Elvis Presley’s Loving You album was in monaural only with catalog number LPM-1515. The album charted on […]

This is it. Elvis Presley’s very first LP release on RCA records. It was March 1956, when LPM-1254 was released.